Why did the chicken cross the road?

Why did the chicken cross the road? is a short game that explores subverting the player’s expectations while simultaneously weaving a deeper meaning as they play. It was created alongside a tutorial video showcasing some basic game dev foundations and the features of a lightweight game engine called Bitsy.

As one of the co-organizers for the Latinx Games Festival in 2020, I was tasked with creating a how-to video for folks looking to get into game design. After doing a bit of research on different beginner-friendly game dev tools, I stumbled upon one called Bitsy.

Bitsy is a web-based engine that is described as “a little editor for little games or worlds”. I felt that it would be a great tool to use for this project since users wouldn’t have to download anything and could design something right off their browser, which lowers the barrier of entry for those looking to get started.

The initial idea for the game was to create a simple demo for what Bitsy can do. You would play as a chicken crossing a road, and as you go up to different objects to talk to them, they respond with different “Why did the chicken cross the road?” jokes.

The primary goal of this project was to showcase some basic game dev foundations (rooms, sprites, and dialogue interactions) in a way that is user-friendly and easy to understand for someone who has never made a game before.

A secondary goal was to try and demystify how games are made by sharing my own game design process and making a small project while exploring the different features that Bitsy has to offer.

Elicit emotions from players with a simple project

The third and final goal was to try and make an experience that can elicit some sort of emotion from players in the span of a few minutes. This was a goal that emerged after I had already completed the instructional video for the Latinx Games Festival. 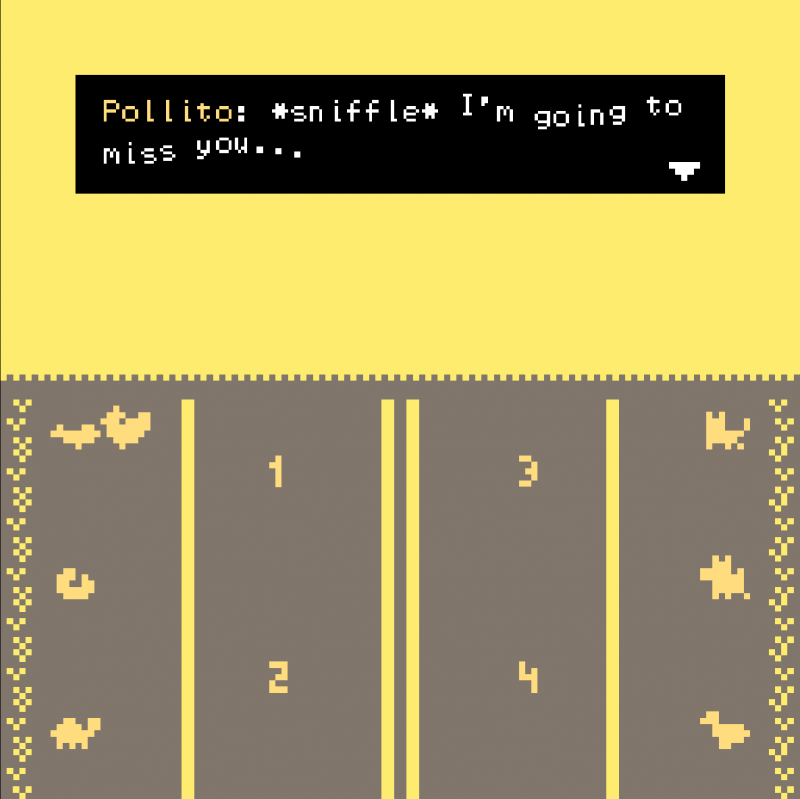 Before I could start working on an instructional video for how to make a Bitsy game, I first needed to learn how to use Bitsy myself. After reading the documentation and poking around the tool for a couple of days, I felt that I had a good understanding of it and could start thinking about how to showcase its different features. I started by drafting up a script that detailed my own game design process, as well as explaining what Bitsy is and how one might use it. Once the script was in a good place, I started collecting various visual assests like images and screen recordings that I would include in my video. I then created a slide deck of my main talking points in Keynote and edited the final video with my voiceover in Final Cut Pro.

When I first started working on this project, the game component of it was simply meant to serve as a demo for Bitsy. My initial demo only included a chicken as the player character and a cat NPC that told a single joke. Development up until this point was included in my “Making a Bitsy Game” video. However, as I continued to work on it, something unprecedented happened; I started thinking of new ways to make the game more meaningful and not just a demo. Shortly after finishing the video, I started making the connection that the idea of a chicken crossing a road could symbolize a story about immigration, and I started exploring different ideas for how to represent that in the game.

If you haven’t played the game yet, now would be a great time to give it a try! You can play it by going to my itch.io page, or you can watch the 5 minute walkthrough video shown here.

Okay! Now that you’ve checked it out, we can finally talk about it! So as I mentioned before, I came to the conclusion that a game about a chicken crossing a road could serve as a metaphor for a story about the immigrant experience. However, I didn’t want to disclose that information to the player until they reached a pivotal point in the game. By using the guise of a “chicken joke simulator”, players lowered their guard and didn’t have high expectations in terms of the narrative or emotional outcome the game would provide.

The numbers / jokes at the center serve a red herring, while the various characters represent different points of view from people that an immigrant might encounter. On the left side you have their family, a false friendship, and a guide. On the right you have their extended family that they’ve never met, a xenophobe that is silent until they aren’t, and the cat-alyst that sets everything off. On the way back to their family, the jokes in the center are replaced with reasons an immigrant might feel that they need to make such a journey, and the game ends in the same place it began to signify the cyclical nature of the story.

One of the biggest inspirations for this project was Brenda Romero’s Train, a board game about the holocaust. I was fortunate enough to have Brenda as my Foundations of Game Design professor at UC Santa Cruz, which also allowed me the opportunity to play the game myself. It’s hard to describe the experience of playing Train for the first time, but what I will say is that it was one of the most memorable experiences I’ve ever had playing any type of game. The way that the game subverts player’s expectations and makes them feel complicit after they discover the true nature of their actions is something I haven’t seen anywhere else. I never expected that my first attempt at making something in that vein would come from combining the idea of chicken game with my experience as son of immigrants.

Self-promotion is hard but rewarding work

It was great to share the game through different platforms to see what sort of feedback people had. I shared the game to through my social media, LinkedIn, and itch.io to solicit feedback, which led to a nice mix of strangers and friends sharing their initial impressions. Some of my favorite pieces of feedback were…

An amazing game, funny and smart and a very interesting experience. A must play.

Wow, I came here to play, not to cry. Short but powerful – great job!!

(Non-gamer here!) This is so cool! I love the storytelling and the whimsical-ness of the design combined with a powerful message. The flow was intuitive and the narrative was clear and easy to follow. Thank you for sharing!

With testimonials like these, and most recently being invited to showcase the game as part of the Los Angeles Latino International Film Festival (LALIFF), this project far exceeded my own expectations for what I thought was possible.

Finally, I also feel that I exceeded my project goals for the how-to video! Currently the video has over 7K views and seems to be assigned as part of game design courses for students around the world. The comments are overwhelmingly positive, and I’ve even had people reach out to me via Twitter to thank me for making it! While making videos is definitely not my forte, I’m really glad to have made a valuable resource for the wider game dev community that will hopefully continue to be helpful and relevant for years to come!